Planting new woods is one thing, deciding what to do with an existing wood is another. You may inherit or buy your own woodland, or a holding which includes some woodland, or you may be part of a group which has taken on the management of a wood. In all cases the answer to the question of what to do with it will flow from, on the one hand, the nature of the wood itself and, on the other, your own needs and the work input you can offer. In most cases it’s well worth while getting advice from a skilled forester with good ecological credentials. But here I can give you a pointer to the three main options: non-intervention, coppice and high forest.

Non-Intervention
This means do nothing. Trees grow slowly and a wood is unlikely to suffer if it’s left alone for a  few years while you make up your mind what to do with it. But it can also be a sensible plan for the long term, either for the wood as a whole or for part of it. Very few woods are homogenous, most are composed of different ‘stands’, areas where the species composition, the age and/or the structure of the trees is different. 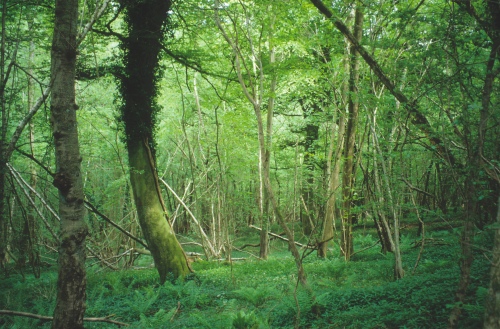 This stand hasn’t been touched for 150 years, which makes it a good candidate for non-intervention. Lady Park Wood, Wye Valley.

In some woods or stands non-intervention may be the best option for preserving and enhancing biodiversity, though in others re-starting coppicing may be better. It depends very much on the nature of the woodland, and your local Wildlife Trust will be happy to give you advice on this.
From a productive point of view it may be the best thing to do with for a stand with no useful or productive species in it. A mix of sallow, hawthorn, birch and the like, growing at a wide spacing, is hardly worth harvesting. If the access for extraction is difficult that will reduce the value of even a moderately productive stand. Remember, produce is extracted in winter, when the soil is at its wetest.

Coppice
Coppicing means felling trees and allowing them to regrow, which they do in a multi-stemmed form. Most broadleaved trees will coppice and most conifers will not. It’s the most productive way to produce firewood and some species, eg sweet chestnut and hazel, are coppiced for craft uses. 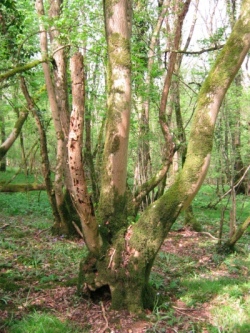 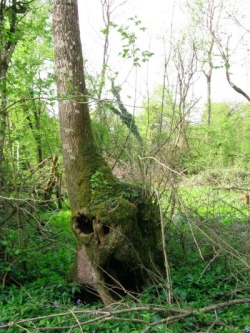 The first tree is multi-stemmed and has clearly been coppiced in the past. Although the second one is single-stemmed you can see that it has too.

Traditionally most woods in lowland Britain were managed by coppicing. If your wood contains trees which have more than one stem, or signs of multiple stems which have been suppressed by competition over the years, then it used to be coppiced. You can restart coppicing after a surprisingly long lapse, up to 80 years for most species. But remember, you will divide your wood up into seperate blocks and coppice each of them on a rotation of perhaps 20 years to give a constant supply of wood, so you need to allow for that in your calculations. However, if you want to coppice for craft purposes it must be ‘in cycle’, ie recently coppiced, otherwise the poles will be too branchy and too thick to work. 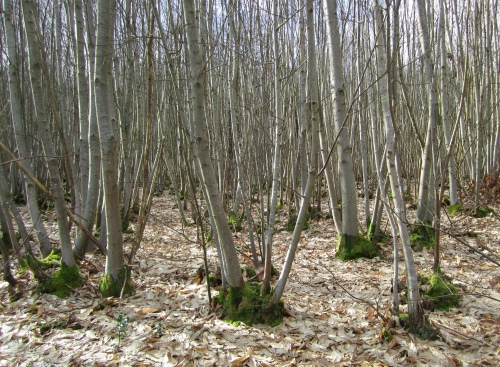 Coppicing is very hard work. It can be great fun to do as a group but as a solitary occupation it’s only for the youngest and fittest amongst us. The main output is firewood, which can be turned into a higher value product as charcoal. So if you have plenty of energy and your house has a wood-fired heating system, or you want to go into the firewood or charcoal business, then coppicing may be for you. If not you may be able to find someone who wants to work your wood through a local coppice group or the website Ecolots.

High Forest
This consists of tall trees with single stems, which can be sawn up into planks, beams and other similar products. It’s almost always plantation, as opposed to semi-natural woodland, and may consist of either conifers or broadleaves or sometimes a mix of the two. 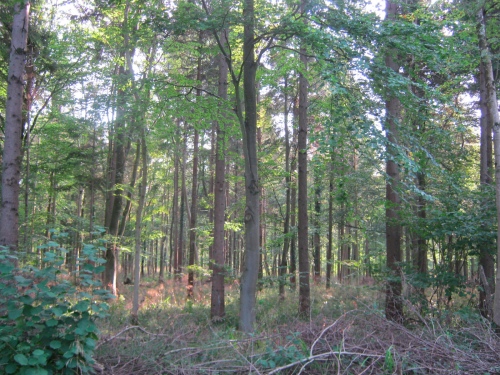 A mixed stand of high forest.

In contrast to coppice, work is relatively infrequent, perhaps thinning every 10-15 years and a final harvest which may be many decades into the future. But the thinnings hardly pay for the cost of maintaining the wood and almost all the return is in the final crop.
If the stand is coniferous there’s no choice but to treat it as high forest. With broadleaves you may get a choice: a young stand can sometimes be cut down and turned into coppice, though trees which have already spent half their lives in a single-stemmed form may be killed by the shock of coppicing; whereas former coppice can sometimes be singled to high forest. Expert advice is needed to assess the viability of either option.
Conventional management of high forest is by clear felling, ie the whole stand is grown to maturity together and all felled at once. This is bad for biodiversity, landscape and soil erosion. It usually involves contractors from out of district with huge harvesting machines and  the product is a bulk commodity which is only viable in very large quantities.
Another approach is continuous cover forestry, where trees are felled individually or in small groups. Biodiversity, landscape and the soil are conserved, and the regular supply of small quantities of timber can give local employment, both in the woods and in adding value. There are various methods of continuous cover forestry and the one most often used here in Britain is group selection, where trees are felled in small groups, each group usually with a diameter of twice the height of the surrounding trees.
There may be some loss of production in converting an even-aged plantation into the uneven-aged structure necessary for continuous cover, as some trees will be felled before their optimum size and others left to grow older than the ideal. But on the other hand it can give the forester the opportunity to get more out of the trees, earmarking a small group here for early felling for a specific market, letting a high-quality group over there grow on to get the high value which comes with maturity, and so on. It’s very different from the pile-em-high-and-sell-em-cheap mentality of conventional forestry.