it’s nearly the end of March and I haven’t sown a seed yet. I reckon that here in the south of England early April is about right. I used to rush to get them in early so as to make the harvesting season longer. But over the years I’ve learnt that a more relaxed attitude often gives better results.
Seeds sown too early, often in a warm spell, can suffer a check if a cold spell follows, and this check affects the plants’ vigour throughout their life. Or they just struggle with generally low temperatures. Later sown seeds are much more likely to have reasonable temeratutures throughout their early life and grow steadily. 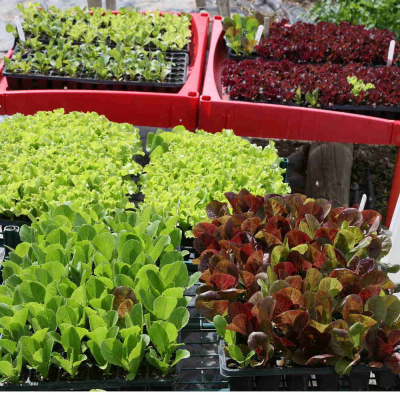 Modules
I raise all my seedlings in modules. It’s more work than sowing them directly into the ground but it gets the little plants off to a much better start. It means fewer losses to slugs, as they spend their most vulnerable time in the greenhouse, which I can keep slug-free. It also means fewer gaps in the crops, and where you re-sow into a gap you get a much smaller plant which never really catches up with its neighbours.
A variation on modules is rootrainers. Orgiginally developed for trees, these are useful for deep-rooted plants like sweet corn and runner beans. I was introduced to this idea by Deano Martin, who kindly gave me my first set of rootrainers. 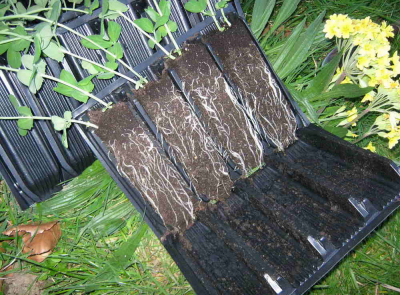 Pea plants in rootrainers ready to plant out.

Compost
The real expert gardeners say you can’t beat peat-based compost. Moorland Gold is a brand of compost based on peat particles dredged from reservoirs, so using it doens’t contribute to the destruction of peat bogs. I’ve used it with success. But I have also used my own mix: 2 parts municipal compost, 2 parts of fertile topsoil and 1 part sharp sand – and I really can’t say it performs any worse. It’s much cheaper, too.
Municipal compost is made from the garden waste people take into the local recycling centre. It’s low in nutrients, but that’s just what little seeds need. For a potting mix, where more nutrients are needed, it can be replaced with seived garden compost.

Watering
It’s very easy to get this wrong, either too much or too little – and the weather makes a huge difference to the amount of water needed. Until the seeds germinate you need to keep the surface layer moist. But once they germinate I always water from below, ie I stand the modules in a tray of water so the compost can suck it up. This way you can be sure you get the water where it’s needed, down at the bottom of the module where the roots grow. Keeping the surface relatively dry helps prevent damping off disease.

Everyone has their own recipie for raising seedlings, depending on what kind of gardener they are. I would describe myself as the no-frills, laid-back kind. It works for me.