Simon Fairlie is a man of many parts: purveyor of Austrian scythes, co-editor of The Land magazine and major contributor to it, expert on planning law for smallholders, and a smallholder himself. He co-taught the smallholding course (see previous post) with Jyoti Fernandes – of whom more in another blog. Simon keeps dairy cows on the fields belonging to the community where he lives, Monkton Wyld Court in west Dorset. The tradition of dairying there goes back almost uninterruptedly to Victorian times, when the house was built, and probably long before that. 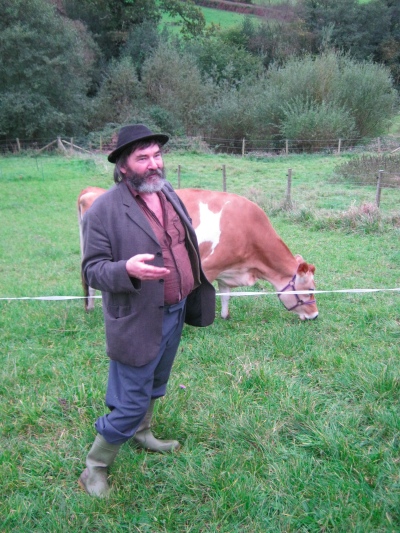 Commercial dairy farming is in a bad way. It’s capital-intensive enterprise, involving expensive high-tech equipment for milking plus tractors and other field equipment to grow the grass. The cows are also fed a great deal of grain, and the work involved in milking and caring for today’s large herds is unremitting. The supermarkets have an iron grip on prices and persistently pay farmers less than the cost of production for their milk, with the result that almost half of all dairy farmers have gone out of business in a decade. Those that remain get ever bigger, in the hope that the economies of scale will save them. 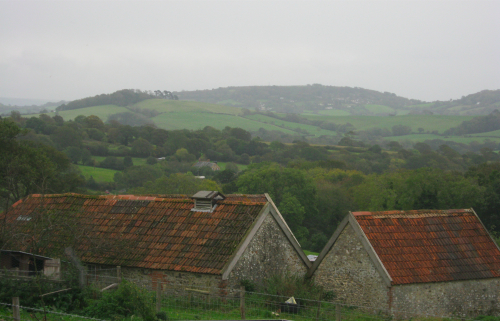 The farmyard at Monkton Wyld fits snugly into the Dorset countryside.

Simon comes in at a totally different level. He has just two cows. He milks them by hand and makes hay with hand tools. The most expensive piece of kit he uses is one of his splendid Austrian scythes. Grass and hay make up almost all of the cows’ diet, supplemented with lucerne (alfalfa) nuts as necessary. No grain is fed. Milking is a leisurely affair, and there are other community members who can do it for him if he needs to be away or take some time off. 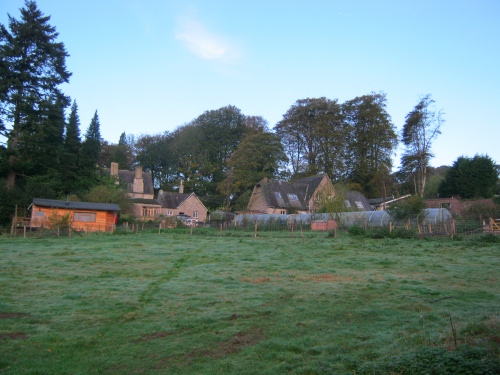 He sells his milk to the community, which gives him a regular market at retail price, and he makes cheese with any surplus. Selling at retail price and adding value – in this case by cheesemaking – are fundamental to the economic viability of small-scale production. Not everyone has the advantage of such a captive market on their doorstep as Simon does, but the demand for local, naturally produced food is strong enough in most parts of the country to make a similar enterprise viable. Simon reckons that with four cows rather than two a person could make a full living.
The whey, the residue from cheese-making, is fed to pigs, at the rate of one growing pig per milking cow. The pigs live in a little paddock which, by the time they go to slaughter, is completely cleared of vegetation, manured and ready to grow a crop of vegetables. Two paddocks are alternated between pigs and vegetables, saving much of the work of ground preparation and manuring. This integration of cattle, pigs and vegetables is a good example of the permaculture principle of linking, where an output of one part of the system becomes an input to another. It’s a cyclic system, just like a natural ecosystem. The beauty of it is that it reduces the need for both work and external inputs while making profitable use of outputs which would otherwise go to waste. 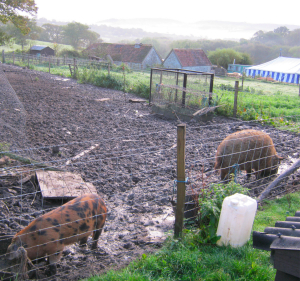 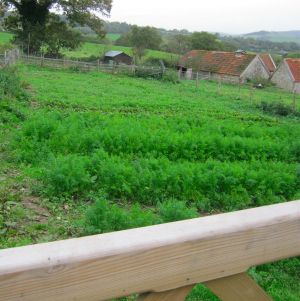 Pigs and vegetables alternate between these two plots.