Planting trees deserves to be done with great care and forethought. Woodland trees live for a very long time and we plant for future generations. We need to be sure that what we leave, to both people and the Earth, is the very best we can. Many things need to be considered in a planting plan but first of all, and perhaps most important of all, is the site. Those of us who don’t have access to our own land may jump at any opportunity to plant on whatever land becomes available, while some people who have their own land often plant trees on part of it simply because it’s surplus to immediate requirements. But turning land over to woodland is a big step and needs to be thought about carefully. 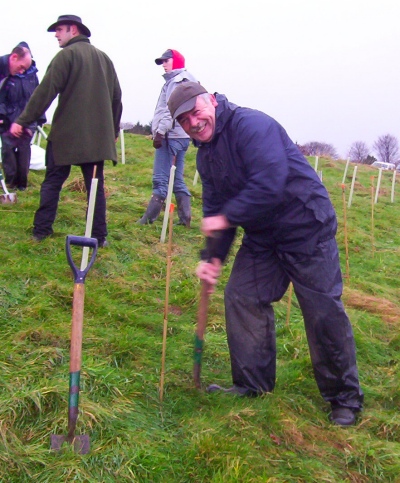 We all love to plant a tree. Pentiddy Community Woodland, Cornwall.

Biodiversity
We often assume that planting trees always represents a gain to biodiversity, but it’s not necessarily so. The vegetation which is already there may have a high degree of diversity, much higher than a new plantation which could replace it.

Herb rich grassland, of which we have lost some 99% in the past half-century or so, is an amazing ecosystem, full of a wide diversity of wildflowers and invertebrate animals, many of them now very rare, which are dependent on the sunny conditions they find there. A new woodland, by contrast, is very poor in species. Once the canopy has closed and the sun-loving creatures have all died out, there’s virtually nothing there but the planted trees. Woodland wildlflowers and invertebrates are very slow to colonise. These days, when remaining ancient woodlands which can provide the colonists are few and far between, it may never happen at all. 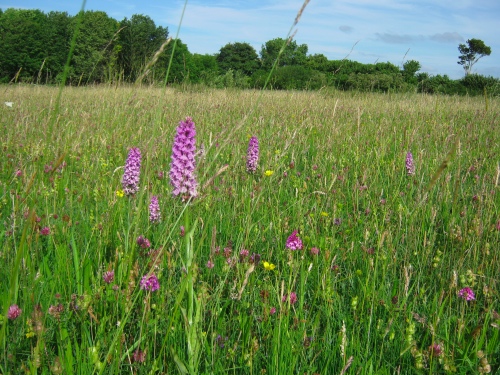 Tragically, the few remaining scraps of diverse grassland are often the very places which get planted up first. They tend to be in places which for one reason or another are difficult to farm and have thus been left alone. There may even be a few pioneer trees and shrubs there already and this can give the idea that by planting trees there we’re simply following nature’s lead. That may well be but before you make any decisions I do impore you to make a good botanical survey, or ask someone else to do it for you. Your local Wildlife Trust will probably be delighted to do so for a small donation.

Heathland, scrub and marsh all have their wildlife value and a change from that state to a new plantation usually means a loss of diversity.

Farmland
Most of the surfce of Britain is made up of farmland, including arable and grassland. This works out at something like an acre (o.4ha) per person. At present, with unbridled use of fossil fuels, we import some 40% of the food we eat. But future generations will most likely need every bit of that land to feed themselves. Hopefully this will include a lot of agroforestry, where productive trees are intimately mixed with field crops and grass. But that’s not the same as planting it up with woodland. 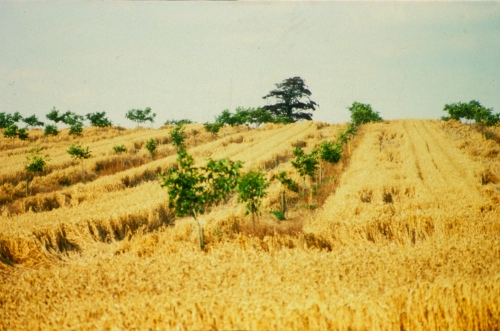 Trees to provide us with timber and fuel are a very important output. In medieval times woodland was sometimes worth more money per acre than arable. But trees are the natural vegetation of this country and can grow almost anywhere, whereas farm crops are more demanding and will only yield well on good land.

Where to Plant
So that leaves land which is neither of high value to wild species nor good farmland. Where can we find it?

Planting new hedgerows, or replanting old ones which have been taken out is an obvious starter. Along with that I would include windbreaks and shelterbelts. They take up very little land and the increase in yield they give to adjacent farmland far outweighs the loss of production due to the land take.

In hilly country the prime place is steep land. It’s hard to farm steep slopes productively, either with crops or animals, and thier output of food is limited. Look around any hilly district and you’ll see a close match between the steepness of slope and the siting of ancient woodland. This doesn’t apply to modern plantations, which are often placed quite irrationally. But beware – steep slopes are often the last refuge of wildflower-rich grassland! 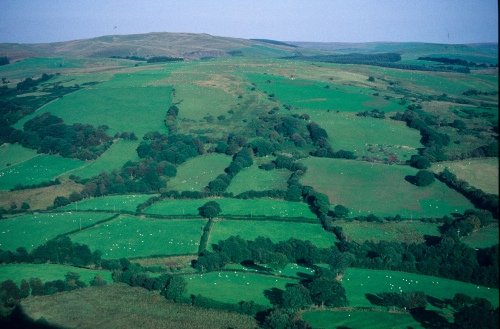 Some scraps of ancient woodland survive on the steepest slopes in this landscape. Filling the gaps in with new planting could be a good idea.  Near Ffarmers, Mid-Wales.

In flatter parts of the country land which is less suitable for farming includes poorly drained clays and acid sands which are low in plant nutrients. These days soils like these can be forced into productivity by artificial drainage and chemical fertilisers. Our descendents, without the access to fossil fuels and other non-renewable resources that we have, will find it much more difficult to grow crops on them.

It may be frustrating if you’re raring to go and someone offers you an opportunity to plant on a site that isn’t suitable. But before you rush into it, please do give a thought to biodiversity and to our descendents.