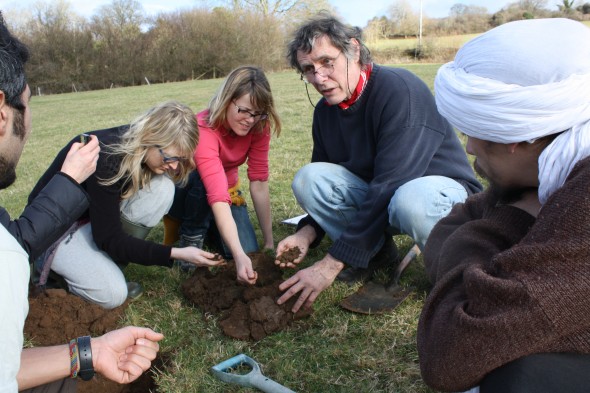 Many of you will have heard the very sad news that our founder and namesake Patrick Whitefield passed away on Friday 27th February following several months of illness. He was diagnosed with a disease of the bone marrow in June 2014 and retired the following September.

Patrick loved his work and continued to write articles and even a short book from his sick bed for as long as he was able. When he was given a prognosis of a few weeks in the autumn his outlook was impressively philosophical

“I feel happy with my life, I’ve had a career that I love and believe in, and I feel content with the work I’ve done.”

No one would deny him that, Patrick was a pioneer who became a legend. He inspired people all over the world with his teaching, books, articles and films. His amazing integrity, even at the end will be a constant source of inspiration to me for continuing his work.

In his introduction to The Earth Care Manual he says:

“This book is much more about solutions than about problems, more about what we can do in the present situation than about how we came to be in it in the first place. Yet there’s no escaping the fact that the Earth is in a dire state, and getting worse…

“This raises the question: Is it all worth it? If we do our best to heal the Earth and make our place in her a sustainable one, is there a good chance that we will succeed? Or is it a forlorn hope? It’s a big question, and one which can lead to depression if we look at the facts honestly and dispassionately. But to my mind it’s the wrong question. Even if we could answer it – and we can never know anything about the future for certain – it would beg the question; How do I want to live my life?

“Here I find the teaching of Mahatma Gandhi very useful. One of his precepts was that of non-attachment to the fruits of our labour. All we can do in life is to make sure that we play our own part in it the best way we can. Much as we would like to, we can never do more than that. Everything we do is so complex, and relies for its ultimate completion on so many different people and natural forces, that we can never take responsibility for the final outcome of our actions. We can only take responsibility for our actions themselves.

This encapsulates the spirit of Patrick as a person, and Permaculture as a whole. Patrick’s particular approach to permaculture was practical, accessible and land-focussed. He originally trained in Agriculture and worked on farms in the UK, Middle East and Africa, before returning home and answering his true calling as an ecological activist, becoming involved in The Ecology Party which later became The Green Party. He learned about permaculture in the 1980’s and began running his own courses in the early 90’s at Ragmans Lane Farm, where we still run courses today. During his permaculture career he has published several books, the most substantial of which, The Earth Care Manual has become a text book for temperate permaculture for teachers and students alike.

Following the release of The Earth Care Manual Patrick was asked to speak, teach and consult all over the world. He was consulting Editor and regular contributor for Permaculture Magazine and wrote for other publications including The Land Magazine. He was interviewed on Radio and TV, appearing in the BBC series It’s Not Easy Being Green and the documentary film A Farm For The Future. He had a huge following on social media, not only because of his wisdom and experience, but also because of his natural warmth and charisma. His engaging teaching style is captured in a series of youtube films which he made in recent years, and in the filmed lessons contained within our online course The Land Course Online.

There have been many beautiful tributes to Patrick since he passed away, but the best way we can honour his memory and benefit from his legacy is to practice what he preached.

“People often think that there are two ways of doing things. One is by returning to a life of drudgery, the other is by throwing fossil fuels at it. Permaculture offers a third way of doing things and that is by design.”

Permaculture shows us a way to be a part of the solution. It gives us a framework within which we can learn again how to be a part of the ecosystem, not separate from it contributing only to it’s demise. As Patrick said, we can never know the outcome of our efforts, so what it gives us here and now is a way of living according to our values. It can empower us to take responsibility for ourselves, our families our communities and we hope, our collective future.

In this spirit I will continue Patrick’s work by running our residential and online courses and offering permaculture design consultations. I will aspire to practice what I preach with as much integrity as my friend, colleague and mentor did. I hope you will join us.