‘Ourganics is as much about people as it is about growing food,’ Pat Bowcock told us as she showed us around her 5 acre (2ha) holding deep in the Dorset countryside. ‘I couldn’t have done this without my mum and my kids – and 1500 people a year come through here.’ 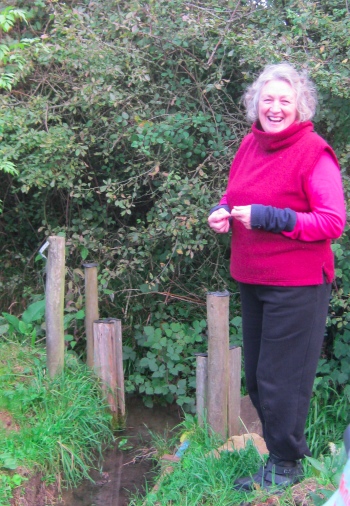 Pat at the sluice where the water enters her land.

It was originally a water meadow, a traditional irrigated grass field designed to give early grass in the spring for sheep. Pat has cleverly transformed the irrigation system to water the crops she grows, including vegetables, a forest garden, a polytunnel and willow. When the water enters the field it’s stored in a pond at the top, which gives full control over the flow through the garden.

The flood garden is the main vegetable growing area. The water is let into it and floods the paths, coming half way up the retaining boards to give the right amount of irrigation to the vegetable beds. It only works because a large bulk of water can be let in from the pond at one time. Vegetables are Pat’s main cash crop but these days she’s finding it harder to sell the veg as more and more people are growing them for sale as she does. 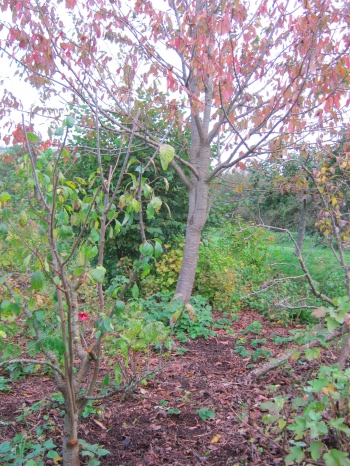 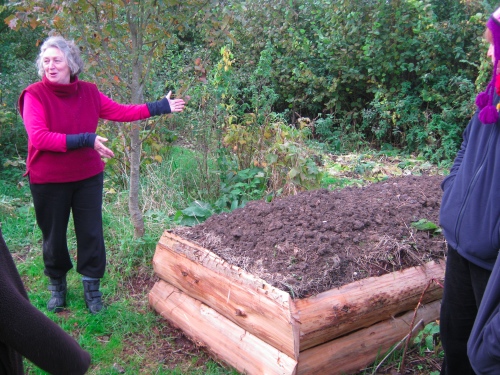 Pat is trying an experimental hugelkultur – a high raised bed with slowly-rotting wood buried beneath the soil to give fertility over a period of several years. This method has become popular since Sepp Holzer introduced it to the permaculture community worldwide. Pat’s version is unusual in that it has boards on the outside but these are necessary when using flood irrigation. 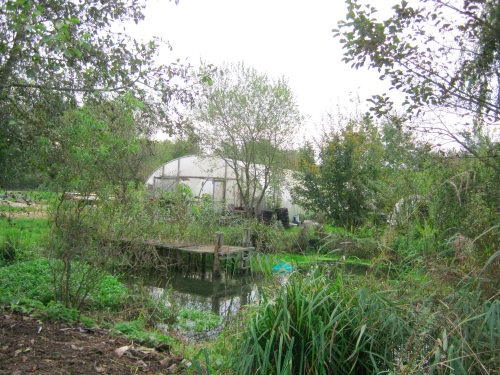 She originally planted a lot of willow, which grows well with all the water. But she found it takes a great deal of work in proportion to its value, so now she’s taken some of it out and what remains is harvested by the customer. She gets her firewood from the other trees, mainly the mature ones in the old hedges.

The polytunnel is watered by a hose with a little electric pump. This gives more control than flooding. Inside the tunnel there’s a small pond, which no doubt attracts frogs for slug control. But Pat pointed out that it’s also her water-level guage. It goes up and down according to the height of the water table and allows her to monitor the whole water situation on the holding. 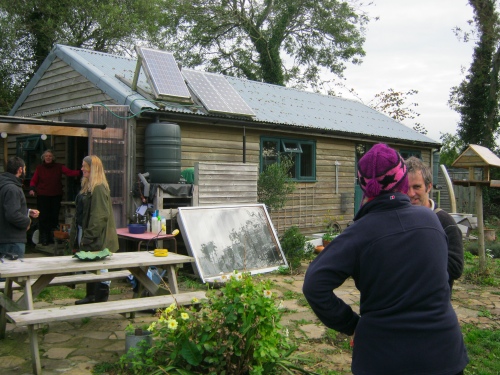 Over the years countless people have helped, some paid some for a swap. Ourganics is open seven days a week and anyone can come and work in exchange for some food. As Pat said, it’s as much about people as about growing food.