‘The best place to store water is in the soil.’ When I first heard this saying, early on in my permaculture education, it was like a light bulb coming on. It just seemed so obviously true. After a couple of decades of practicing permaculture I realise that any blanket statement like that is almost certain to be wrong or at least only right in certain places and at certain times.

For me the essence of permaculture is to tune in to the unique characteristics of a particular piece of land and of the people who are inhabiting or using that land. From this flows a design which will meet the needs of both land and people. It’s the very opposite of taking an idea off the shelf and saying, ‘Hey, this size fits all!’ The differences between one place and another can be quite subtle and what works in one back garden may not be suitable two or three houses down the street. But there are also differences on the macro scale, such as those between Australia, where permaculture originated, and Britain, where I live and work.

I’ve already written a blog post about mulch. It’s almost obligatory in the Australian permaculture garden but here its advantages need to be carefully weighed against the problem of slugs, which are the biggest limitation on vegetable gardening in our climate and are encouraged by mulch. Moving out from the garden to broadscale permaculture we come upon the swale, another permaculture icon, and here too we have to ask whether what’s appropriate down under is always appropriate here.

How Swales Work
A swale is the opposite to a ditch. The purpose of a ditch is to move water, usually for drainage, so it has some degree of slope along its course and a relatively narrow cross-section. By contrast a swale is exactly level and snakes along on the contour. Water that enters it stops moving and soaks into the soil, aided by its broad, shallow cross-section. The aim of a swale is to take surface runoff water and store it in the soil. 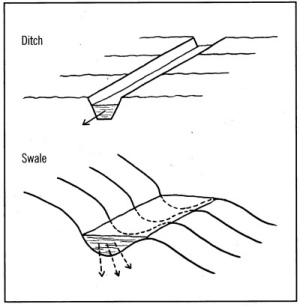 Much of the inhabited part of Australia is in the sub-tropical zone. Rain falls mainly in the summer and it tends to come in big, intense rainfall events. Surface runoff is common, not just because of the intensity of the rainfall but also because the soil often dries out completely between one rain and the next, and dry soil resists absorbing water in a way that moist soil does not. Evaporation is intense and soil water is more often in deficit than in excess. In these circumstances storing water in the soil is ideal: the crops are growing and need water just when runoff is happening. The swale is the perfect tool for this.

Here in Britain the situation could not be more different. The majority of the rain falls in the winter, when it’s too cold for crops to grow. Rain falls gently and most of it infiltrates into the soil, making surface runoff relatively rare. Unless the soil is compacted, it only happens when the soil is already waterlogged and the rain goes on falling, ie in a wet winter. In our cool climate evaporation is low and soil water is more often in excess than in deficit. The last thing we need to do is to store more of that winter rain in the soil. The appropriate pattern here is, firstly, to store winter rain in ponds and tanks for use as targeted irrigation in summer and, secondly, to drain the land of excess water where necessary. 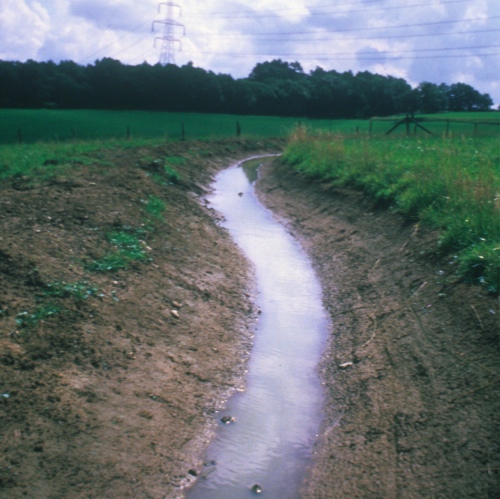 A newly dug swale. The water in the bottom is rainfall which has fallen on the swale itself, not runoff.

Swales in Britain
Now I wouldn’t rule out the use of swales altogether here in Britain. They may have a part to play in flood prevention. If they can cause more water to infiltrate into the soil on sloping ground in the uplands, they can stop it rushing straight into the rivers, redirect it to recharging the aquifers and thus turn a sudden flood into a slower flow, more evenly spread through the year.

In the long term the same thing can be done by allowing much of the uplands to succeed to woodland but swales may be a useful short-term measure. They can have a similar role to play in sustainable urban drainage systems (SUDS), where the aim is to infiltrate storm water into the subsoil rather than send it down storm drains. In the long, term climate change may lead us to a pattern of weather which is quite different from now, one in which violent rain and hot dry spells alternate through the growing season. Then swales would be useful on productive farmland as well. But on productive land now, I can’t see a place for them. 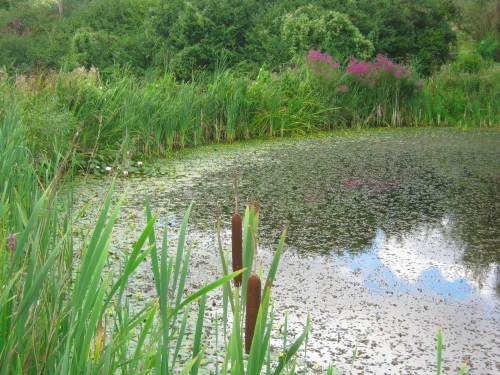 A traditional pond is a good place to store water in a British landscape.

Teaching about Swales
This all seems pretty clear to me but every now and then I come across a British permaculturist, sometimes fresh off their Permaculture Design Course but sometimes much more experienced, who thinks of swales almost as a panacea: if you have any water problems at all, put in swales and everything will be all right. OK, I’m exaggerating, but not very much. I must take some responsibility for this myself. We teach about swales on our courses. I’m always careful to point out how limited their application is here in Britain, and we do get participants from other parts of the world where swales may be more relevant. But inevitably people get attracted to the idea of swales. Maybe it’s because they’re a symbol of permaculture, something which makes it stand out from more traditional ways of working with the land. Perhaps that’s why I teach about them too. I want to make the permaculture distinctive and I don’t include things which can be learnt elsewhere on a Permaculture Design Course. You can learn about drainage and pond construction from any conventional book or course on land and water management. But swales are something different. Maybe I need to rethink this one.

Maybe I need to put more emphasis than ever on that process of tuning into the uniqueness of place and people, and less on making permaculture look different  .