“What, no mulch?” is a question I’ve been asked a couple of times by students of permaculture who’ve seen my garden or a picture of it. Well, I do use mulch but not always or everywhere.
Permaculture started in Australia and when it first came over here people accepted the whole package, including zero tolerance of bare soil, which in the garden means mulching. But they obviously don’t have the same slug problem in Australia as we do in Britain. Mulch makes the ideal cover for slugs and it’s easy enough to lose whole crops to our slimy friends even without it. All the advantages of mulch – saving water, suppressing weeds, protecting the soil, encouraging soil life – can be outweighed by the slug factor if it means the difference between vegetables and no vegetables.
Charles Dowding, the famous no-dig gardener, started out following Ruth Stout, the equally famous North American gardener, who used masses of mulch in her no-dig garden. Very soon he realised that you can’t do that here in Britain. He evolved a policy of only ever mulching with compost. In fact he took it a step further than that and now only mulches in the autumn. This goes against conventional wisdom, which says that all the mineral nutrients will be leached out of it over winter. But Charles is adamant that his soil is so full of humus, so teeming with life, that the nutrients are taken up and held in biological form till the beginning of the growing season in spring.
I haven’t quite got the nerve to follow Charles in putting on compost in autumn, but I do tend towards mulching only with compost. As much of my garden as possible gets a 5cm (2”) covering of compost each year, often put down between the growing plants. But there are exceptions. 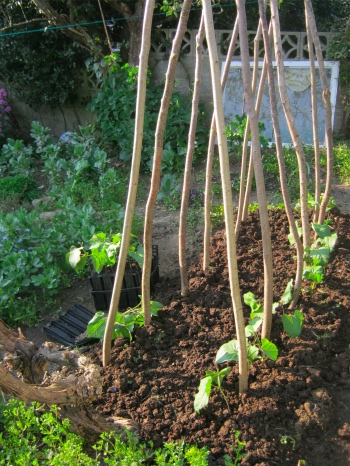 My runner beans go in with a mulch of composted horse manure.

One is when I use manure rather than garden compost. If you leave manure on the surface with no covering it doesn’t incorporate into the soil in the way that garden compost does. It just dries up into inert chips and you can see it still sitting there at the end of the growing season. So it needs a second layer to keep it moist. This spring I’m using reeds, which I collect from my former field, now a nature reserve, where the reeds are cut as part of the habitat maintenance. 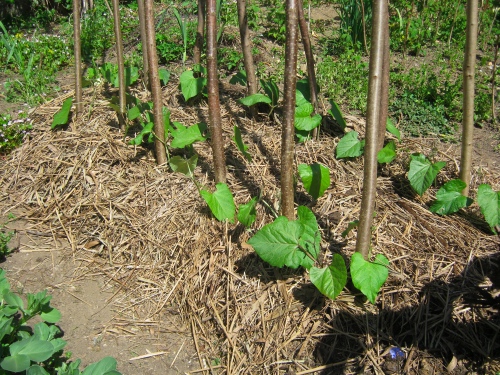 The runner beans get their layer of reeds.

The other is in dry weather, when conserving moisture is more important than usual and slugs less so. At the moment there are few of them around and the weather seems set dry, so before mulching I water well. This means 20-30li/m2 (4-6gal/sq yd) according to how dry the soil is. Both the beds illustrated here had that first. Then on goes the mulch. Sometimes this is a layer of paper topped off with reeds but if compost is needed anyway, as you see here, that makes the lower layer. 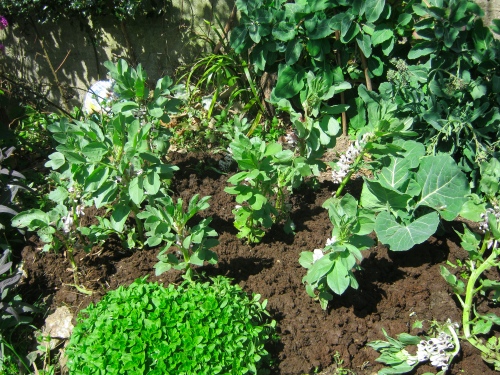 A polyculture, mainly broad beans, gets the same treatment as the runners: manure… 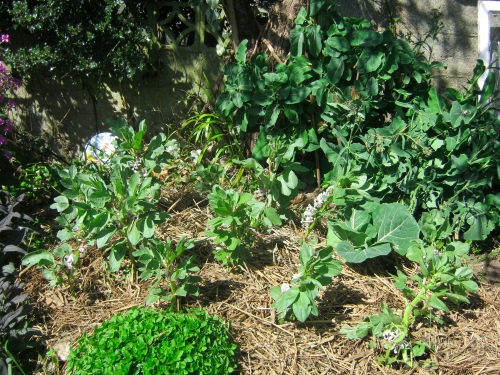 But at the first sign of a slug or a definite change in the weather – the top layer of reeds will come off in a flash.

If you want to know more about mulching, we teach it on all our courses. See the menu at top left.