Crop rotation is generally held to be the absolute keystone of organic growing. But in one of my recent videos I said that I don’t really follow a strict rotation in my home garden. The truth is that I do in theory but the practice is never quite the same thing.
Rotation of crops simply means that you don’t grow the same thing in the same bed one year after another. You grow it in another bed and put another crop in that one. Gardening books show neat diagrams of how you divide your plot into four and rotate the crops around over four years, like this. 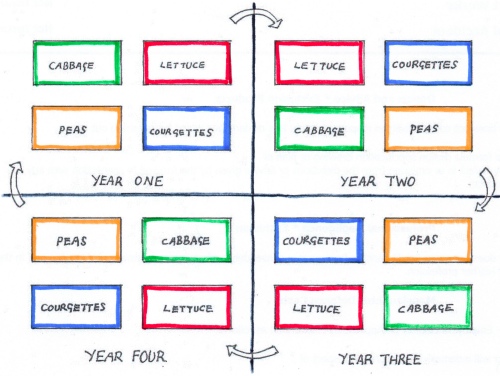 There are several good reasons for doing it, and the main ones are: 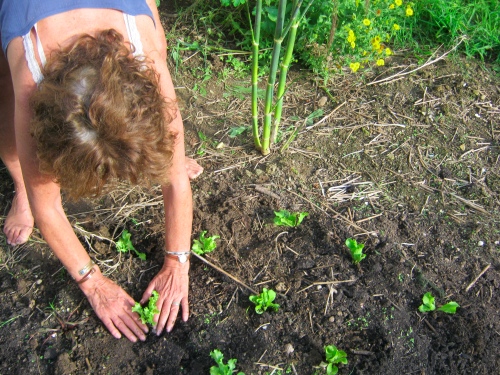 Lettuce can often be fitted in before or after another crop.

Things Fall Apart
But how many of you who grow a vegetable garden can honestly put your hand up and say that your plot looks like the diagram above? It probably did the first year you set up the garden, but don’t you find that things begin to slip a bit as the years go by? I certainly do. Looking back I can’t say exactly why this happens. Perhaps I get a crop failure once in a while and replace the failed crop with something different. Maybe I want to grow more of one thing and less of another one year. Anyway, whatever the reason, things fall apart. Does it matter?
Well I’d say it does and it doesn’t. The most important reason for rotating is avoiding the buildup of pests and diseases, but not all vegetables suffer from soil-borne pests and diseases. There are just three groups which need to be kept as far apart in time as possible:

Rotation won’t exactly cure any of these but it helps prevent them becoming a problem in the first place. As for the other crops, you can really put them where you like without losing much sleep over it.

Keeping Records
If your rotation, like mine, has slipped into something approaching chaos it’s important to keep good records. For me, crop rotation is less a matter of knowing which bed is brassicas this year than looking at the record book and seeing which pieces of ground have been free of them for longest.
My garden naturally divides up into six roughly equal areas rather than four, so in theory I follow a six year rotation. I keep a record book and in it each year I sketch a map of the garden showing these six beds. On the map, at the beginning of the year, I write in pencil what I plan to grow in each bed or part bed, and, at the end of the year, I write in ink what I actually planted there. The two are not always the same. 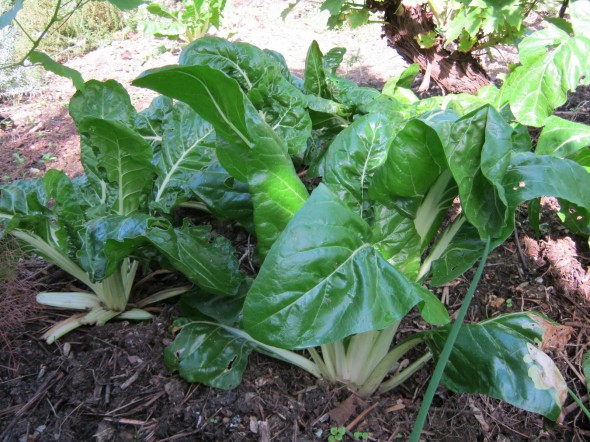 Swiss chard, a trouble-free plant which can go anywhere in the rotation, as long as it gets a good helping of nutrients.

On each map I also hatch in where I’ve applied compost or manure. This way I make sure that if any patch of ground missed it this year it will get it next. In fact I make so much compost these days that I usually end up putting it everywhere except on crops that positively dislike it, such as carrots. But if it was a precious resource which I had to eke out this would be another important reason to keep records. Equally, seeing where the peas and beans had been, with their precious gift of nitrogen, would be valuable.
The penciled-in plan at the beginning of the season helps me to work out how I’m going to follow one crop with another, as with the example of garlic and purple sprouting broccoli, above. This doesn’t always work out perfectly; in some cases the gap is longer than I’d like. But in a small garden like mine it’s really worth the effort to keep empty beds to a minimum. Another way to keep the ground as productive as possible is to grow mixed crops, two or more kinds of vegetable in the same bed at the same time. But perhaps that’s the subject for another post.