Stuart and Gabrielle Anderson’s smallholding in Brittany is a living example of how permaculture can help to make life more wholesome, profitable and fun. One of the main things that struck me on visiting them is how much they enjoy their life on the land. It is hard work, but they take delight in what they do. 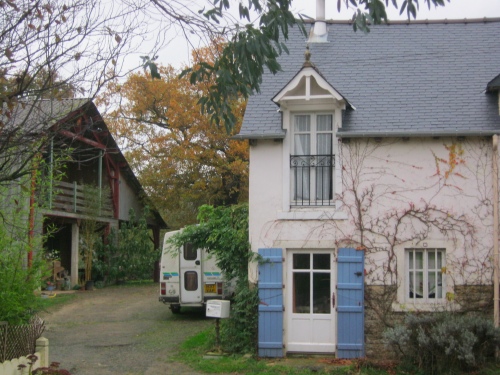 The gite in the foreground, with Stuart and Gabrielle’s house to the left.
The economics of the holding revolve around their gite or holiday cottage. Lots of British people who move to France try to make a living this way but Stuart and Gabrielle’s gite has the unique selling point that guests can take part in the life of a permaculture holding and share some of the produce. 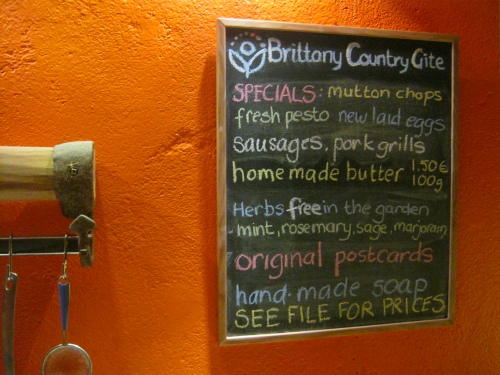 Home made produce for sale to guests.
Gabrielle is the vegetable gardener and when I visited, at the very end of November, the garden was still producing well, not to mention all the produce stored from the summer bounty. 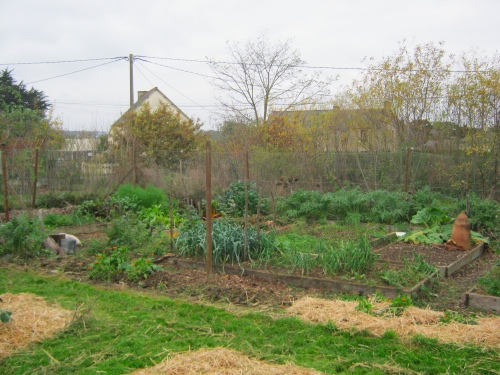 The vegetable garden.
It’s not an easy garden to manage. It can dry out in summer and flood in winter. To help with both problems they constructed a swale, a broad furrow on the contour, just above the vegetable plot. This year, perhaps enthused by the fashion for hugelkulturs, they filled the swale with logs and grew squashes and tomatoes on its downhill bank. Without any watering throughout the long dry summer Gabrielle got excellent yields from them. When the winter comes the swale absorbs the rains and prevents the garden from flooding. 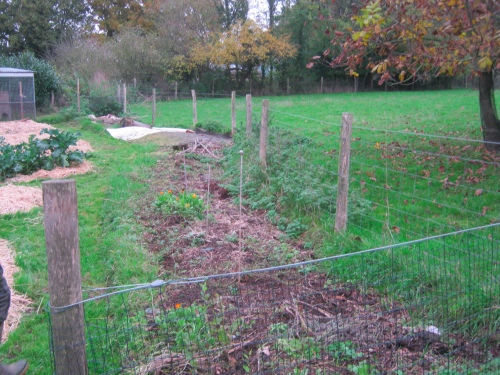 The swale, now filled with logs, after its productive growing season.
A hugelkultur is more normally a high raised bed with logs at its centre. They tried one of these as well but found it dried out too much and wasn’t a great success. ‘This is permaculture,’ says Stuart about the log-filled swale, ‘use the idea but in a way that’s specific to your own site.’
He looks after the animals and he’s one of the very few pig producers I know of who succeeds in feeding his pigs at least in part on acorns. The pig paddock is surrounded by oaks which drop much of their acorn crop into it.  They buy in a couple of pigs each year, timed so that the later part of their growing period coincides with the acorn season. This timing also means that the pigs are slaughtered when the weather is cold, which helps with the curing of the meat. The only disadvantage is that it’s too late in the year to establish a ground cover crop for next years’ pigs. But the long break between one batch and the next means that there’s no significant carryover of disease. 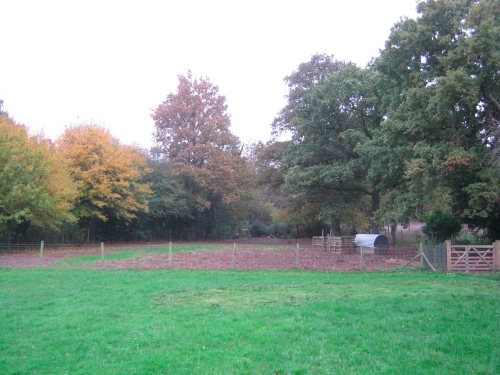 The pig paddock.
The sheep are rotated around the rest of the paddocks on the holding. The total area is just about a hectare (2.5 acres) and I was impressed by how much they’ve fitted in. Almost every square metre is productive. 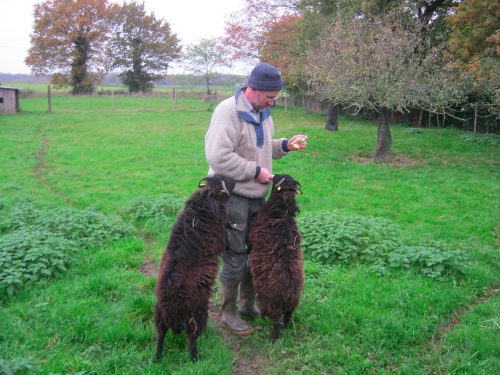 Stuart with sheep.
There are many cyclic flows of energy and materials. The compost toilet is a urine-separating model from NatSol.  The urine is combined with the grey water (all other waste water) which flows into a treatment pond. There’s a rich growth of native waterweeds in the pond and periodically that is harvested and put on the compost heap, keeping the nutrients on the holding and feeding the next cycle of production. 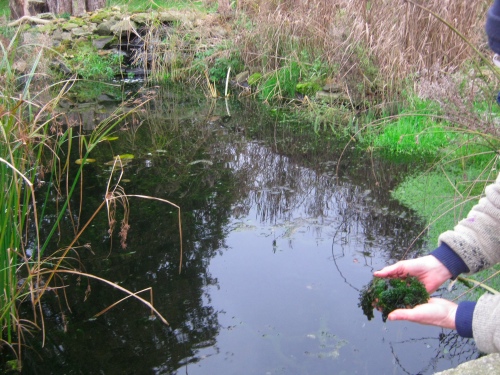 Nutrient rich waterweed in the grey water pond.
No smell whatsoever comes from the pond and it’s a great resource both for their own ducks and for wildlife. The first dragonfly arrived within two hours of completing the construction of the pond. The only input of energy is a small pump which circulates the pond water over a waterfall for just two hours a day to oxygenate it. Another output from the pond is beauty – it’s the visual focus of the holding and a pleasant place to be.
The chickens are at present totally free range. This means they find most of their own food, including all their protein, and only need to be fed a little grain. The grain comes from a local farmer in one of the many links of the web of exchanges that Stuart and Gabrielle are part of.
The disadvantage of total free range is that it limits what can be grown outside of the vegetable garden, which is fenced against chickens. Gabrielle has just completed our Land Course Online and as her Permaculture Design project on the course she designed a natural habitat area for them. This will make use of the one remaining part of the holding which is not really productive at the moment and provide the chickens with all they presently get from roaming over the whole holding. One element it will contain is an area of dead wood which will support a population of insects and other invertebrates to provide the chickens with all the protein they need. 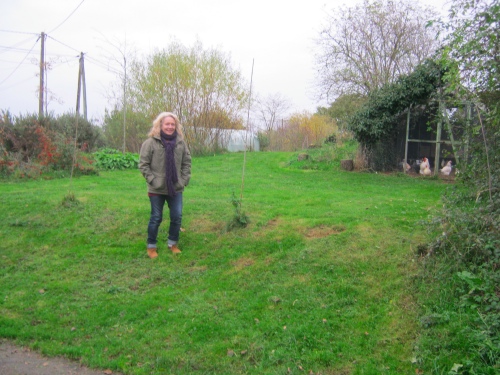 Gabrielle in the future natural habitat area.
Stuart took our residential Permaculture Design Course before he embarked on the smallholding life and has recently taken the remaining modules of the Land Course Online to complement it. Having taught both of them, it’s a wonderful experience for me to see what they’re doing now. As a teacher of permaculture, the real fruits of my work only come when people I’ve taught go out and put it into action on the ground. When I see what people like Stuart and Gabrielle are doing and know that I’ve contributed something to it I get a feeling of satisfaction and fulfilment.

To see more pictures of their smallholding, please go to our Facebook page.