Tucked behind a row of houses, next to a small industrial estate, lies Comallot, more formally known as the Easton Community Allotment, in Bristol. It’s an oasis for people who want to spend a bit of time each week looking after plants, maybe learing a bit about growing, meeting other people and having that contact with nature which can be so healing. 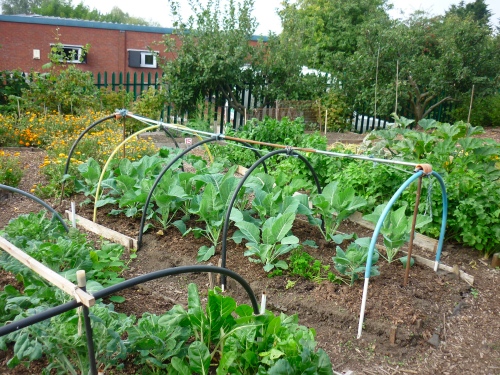 A relief from bricks and mortar.

“This place isn’t so much about growing food,” said Cristina Crossingham, the co-ordinator. “ It’s much more about people.” Some of the volunteers are in a bad way when they first come but working in the garden is a healing experience and bit by bit they become happier and more confident. Others pick up new skills and at least a couple of them have gone from knowing next to nothing about gardening to becoming self-employed as jobbing gardeners. It doens’t only happen to the volunteers, either. One of the joint co-ordinators moved on to start up and run her own project on another allotment site in the city. “These are the outcomes I’m really proud of,” Cristina said. 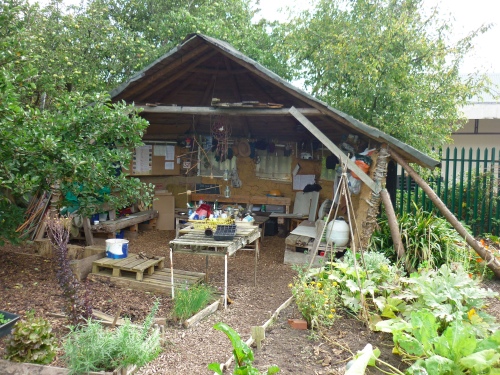 The shelter is the heart of the allotment.

She’s retired herself and this means she has time to give the project the attention it deserves. Over the years I’ve known the allotment as various co-ordinators have come and gone and I’ve never seen it looking as well as it is now, or as productive. Although production may not be the number one priority, there’s certainly a lot of food coming out of it these days, and Cristina is always making improvements. When I visited she was planning to change the layout of some of the beds and paths. This will mean, firstly, you can reach the centre of each bed without treading on it – a key to successfull no-dig gardening – secondly, it will make it easier to move around the garden and, thirdly, it will bring a bit more ground into cultivation.
She had recently been on a one-day course with Charles Dowding, the expert in no-dig vegetable growing. One idea she came away with is that boards round the edges of beds are not only unnecessary but detrimental. The soil stays in place quite well without them and they harbour slugs. So that’s another change she’ll be binging in.
The day I visited wasn’t a Thursday, when all the volunteers come, so she was the only person there. But there were plenty of signs of the others in the work they had done. The watering system, designed and constructed by Dave, the most long-standing volunteer, is an example. Rainwater is collected off the roof of a neighbouring shed and stored in recycled bins, which are all connected together with syphons so they act as one big tank. This is on the high side of the allotment, so water flows from there in a hose to a lower tank, nearer the vegetable beds, where people can bucket it out for watering. 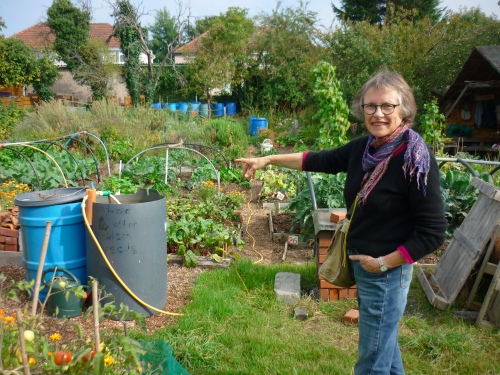 Cristina shows me the water system.

An important aspect of running a community allotment is to not to get upset if the volunteers make mistakes. On the other hand there’s plenty you can do to keep mistakes to a minimum. Clear signing is one of them. Keeping things simple is another. With this in mind Cristina has just devised a new rotation for the allotment. She will divide the vegetable beds into three parts and in any one year there will be a part for brassicas, a part for the onion family and a part for potatoes. Everything else can go anywhere. Those are the only three families of plants which really must be rotated to avoid the build-up of soil-borne pests and diseases. Anything more is unnecessarily complicated, maybe an advantage in a garden where productivity is the main aim, but not essential in one where it isn’t. 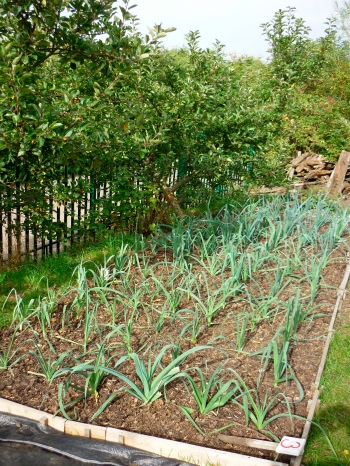 Leeks, one of the crops that does need to be rotated.

‘We always divide up the produce equally,’ she told me. ‘It’s not about people earning the vegetables, it’s about them having a positive experience.’ The only exception is when we have fewer of something than we have people on that day, such as the squashes. Then we all decide together who’s going to get them.’ 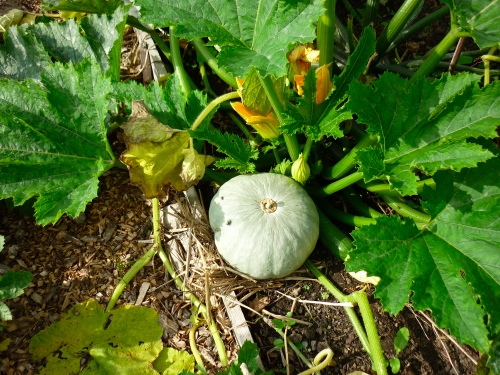 Who will get this one?